Milan was the cheapest place for my brother to fly from the US to Europe, and I was on an island in between Italy and Spain, so we rendezvoused at the airport. Twenty-four hours in the city included his first-ever hostel stay, a waltz through it’s fashion-renowned streets in the best outfits a backpacker has, and a stop to admire the Milan Cathedral, or Duomo di Milano. They were some of the more leisurely hours of our time, considering the following three weeks roaming Europe would include unforgettable experiences, nights with little sleep, exhausting our brains trying to speak new languages, and countless times chasing down buses, (the first of which would be three days later).

We left Milan via Bla Bla Car, a progressive method of organized rideshares between strangers. Our driver this time ’round was Ottavio, an energetic and sweetheart of an Italian who picked up riders during his workweek commute. My brother and I met two other riders, and all enjoyed a fantastic drive from Milan to Padova. We practiced our Italian, Ottavia practiced his English, and the brilliant Claire speaks at least six languages, so she coached us all, but everyone shared in laughter and full hearts.

Ottavio dropped Tony and I off a train station at the end of our rideshare. The two of us continued onto Venice, and while we sat next to one another on the padded train seats, each to their own iPod, I was humbled by gratitude for my brother’s decision to join me in my summer backpacking trip. For the past five weeks, I’d been solo, popping into various countries to visit friends, but it was the first time I had experienced loneliness since I’d decided to stray from the beaten track and give the vagabond gypsy lifestyle a shot. There had always been something enticing about going off independently, but this summer something had changed and I longed to share my memories with another soul. However, an even greater gift was bestowed to me… watching my brother take his first international trip. Like the curiosity I so admire in children, watching Tony soak in the awe of Venice (and every new place we set foot) was inspiring.

Over the next few days we would stroll through alleyways and over canals, sauntering until we were lost, then unwinding through the maze back to the hostel temporarily called home.

But not everything was park meadows and graceful gondolas. The first time we would violently run through the streets to catch a bus was also in Venice. It was disheartening to leave in such a rush, and it must have been at least four bus stations we stopped at before we arrived at the station with the company whose name was printed on our tickets. Meet a backpacker who doesn’t share a similar experience to that, and I’d be impressed. Our weighty rucksacks crushing vertebrae with each planting of our sprinting feet, we eventually managed (however sweaty) to make it to the right terminal, the appropriate lot, and board the correct bus. We would wake up in Rome.

Sounds enthralling but, as I shared on Instagram, “Exploring is my favorite. Also, this isn’t as glamorous as Tony made it seem. We were absolutely exhausted from a seven hour overnight bus where [sweet dreams] no showed. Couldn’t check into our hostel for a few hours, and this is me collapsing in the middle of our 7am breakfast – which was yogurt and cookies. Moral of the story? Exploring is my favorite.”

But, as the old adage goes… When in Rome… so we dressed up and went to the Opera, splurged on wine and pasta, trod the paths from ancient civilizations, and chilled out with some locals at the Trevi Fountain. Three days was not nearly enough, and I’m told by some that our afternoon in Vatican City should count as one of the thirty countries I’m aiming to visit before my thirtieth birthday. As with every city, town, mountain, or nation, there really never is enough time. 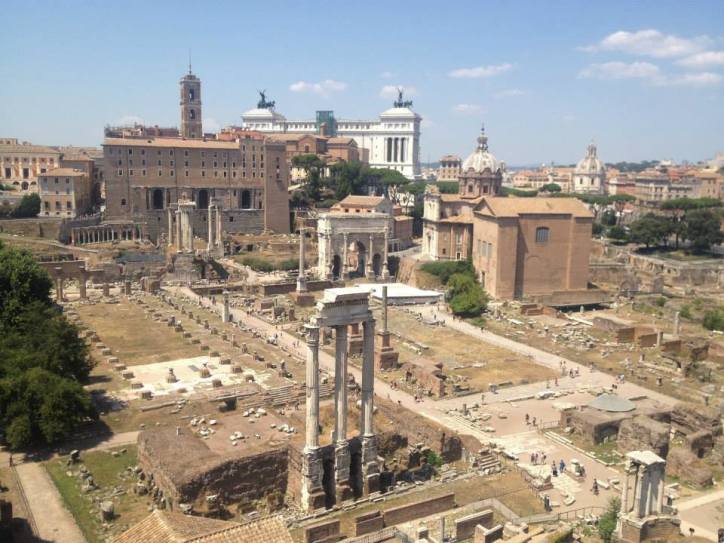 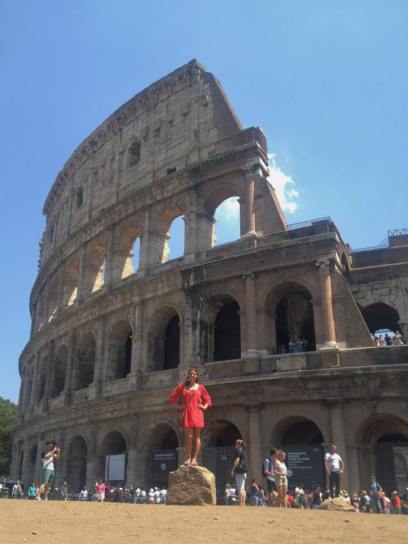 As our final week in Italy unfolded, we journeyed on to Naples, where I ate a different pizza for every meal for two days, gushing over street musicians and extravagant street graffiti.  Next, we headed for Cursi, a teeny, tiny town in the heel of the “boot.” 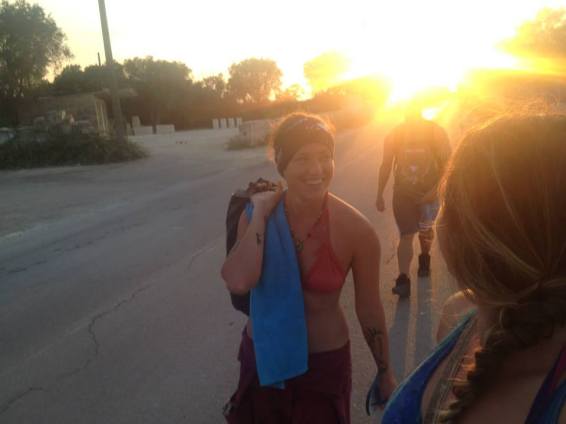 Lucky for us, a friend was visiting a family who invited us to stay with them, as well. Shaded from the heat of the sun when walked through vineyards and gazed at olive trees, bronzed by it as we frequented beaches by bus and houuurs of walking between all them. I watched with wonder as the family hosting us went about their summer routine. They set their tomatoes out to dry on the roof, we joined in the excitement when the region came together to celebrate Tarantula music and spectacular traditional food, and we observed a sad and somber day, when the entire community mourned the unexpected death of a neighbor.

It was sad to leave the town, but we would catch a ferry within a day from Bari. Unfortunately, Bari also happened to be hosting a festival, and its residents and hotels full of visitors… so we crashed curled up next to a cathedral.

We came, we saw, we left exceeding amounts of Italy unexplored. But I’m indebted to Italia for all the gifts it gave to me. And the phenomenon that I got to see things through my brother’s eyes. Because of the context where we existed, roaming Italy for ten days, we became stronger siblings and better humans. This is reason enough for me to travel almost anywhere. Because not every person or tribe or country does things the exact same way, and that means we all have so much to see and to learn.